It’s as simple as that. I was so engrossed in Red Rising that I didn’t even hear phones ringing or people talking at me. Time ceased to have meaning. I didn’t just enjoy it in the mildly dispassionate, yeah-I-like-these-characters kind of way. This book made me feel every slight, every loss, and every rage like they were my own. Pierce Brown is one talented sumbitch, and now that I’ve finished it I completely understand why the cashier at Chapters started fangirling when I brought it to the till. 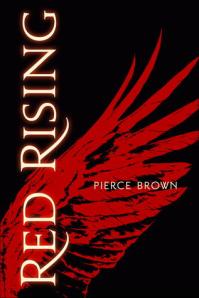 Red Rising (2014) is set on Mars, something like 700 years in the future. Sixteen year-old Darrow is a Red, a miner toiling beneath the surface of Mars to make it habitable for those left behind on a dying Earth. He and his wife Eo, his family, and his clan live in appalling conditions under the oppression of the ruling Golds, but they bear it with the belief that they are humanity’s last hope. Then one day Darrow learns the truth: that Mars has been habitable – and inhabited – for generations, with the other Colours resting on the backs of the slaving Reds. With the help of a group of rebels, Darrow becomes a Gold with a long-term mission of bringing the Society down from the inside.

What I loved/broke my heart the most about Red Rising is that despite the daily hell they’ve been subjected to and the way the Golds exploit them, Darrow is proud of who he is and where he’s from. But when I say he “becomes a Gold” to tear it all down, I don’t just mean that the rebels dress him up and send him off and hope for the best. They spend like a year training him, teaching him and transforming him. They take everything from him that made him Red, including his bloodydamn eyes, to the point that Darrow realizes his beloved Eo wouldn’t even recognize him. He can’t stay himself and take down his enemy, like my girls Katniss and Juliette. He literally has to become his enemy to bring justice to his people, and it’s the perfect twist on the dystopian-rebellion trope to make this story stand out against the rest.

I saw Red Rising play out like a movie in my head, but someday we’ll be able to see it for realsies. Marc Forster, the director of World War Z and Quantum of Solace, will be behind the camera for this film adaptation. While I’m not totally thrilled about that, I do like the fact that Brown wrote the screenplay himself. Here’s hoping they can’t screw it up too badly if the author is involved!

There aren’t words enough to convey how much I loved Red Rising and how it took me for an emotional ride. I’m telling anyone who’ll listen to check it out, even YA haters. Don’t be fooled by his age – Darrow is no angsty teen. He’s more mature than me or, frankly, most of the people I know. The sequel, Golden Son, is out now, taunting me from my bookshelf while I try and stay focused enough to finish this post. The finale, apparently titled Morning Star, is expected in 2016. What a slagging long wait!