I can’t remember the last time that I came across a book that got under my skin quite like Cassandra Clare’s City of Bones.  I can’t believe that it took me this long to get around to reading it! Since I started it a few days ago, City of Bones has been all I can think about.  I was staying up unti 4 AM with a book light, ignoring the world on my breaks at work, and waiting in the car outside the grocery store trying to cram as much of this book into each day as I could possibly manage.  I felt a lot like this:

I will confess, my motivation for reading City of Bones came from seeing the preview for the upcoming film when I was in my local Cineplex to see “Warm Bodies”.  I remember watching the preview with no small amount of fascination, and finally saying to myself “That’s what that book was about?” as I had noticed it many times in bookstores over the years, but always glossed over it in favour of other things.  As I felt after finally reading The Hunger Games and the Harry Potter series, long after they had first been released and become popular, I could just kick myself for not knowing about this book sooner.  To think I could have known about the brave and feisty Clary, the tortured and reckless Jace, and their strange and mystical world since 2007!  Bad Nichole! 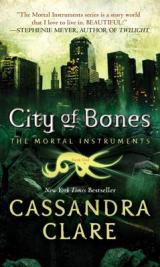 Now as much as I absolutely devoured and adored this book, I will tell you it was about as awkward to describe to other people as it was to explain the premise of Twilight.  This book has EVERYTHING: angels, demons, demon-hunters, vampires, faeries, warlocks and werewolves, as well as some kind of evil foot soldiers that sound an awful lot like zombies.  Then throw in a teenage love triangle that goes horribly wrong (oh so wrong!) and some very solid character development that actually brought me to laughter or tears at the appropriate moments, and you’ve got yourself a winner!  Honestly, really excellent writing; Jace and Clary have some amazing banter going on that consistently had me laughing out loud.  I can’t get my hands on City of Ashes and City of Glass fast enough to finish this particular story arc.

As I understand it, City of Bones, City of Ashes and City of Glass (the first three books of the “Mortal Instruments” series) can pretty much stand as their own trilogy.  They were followed by City of Fallen Angels, City of Lost Souls, and (next year) by City of Heavenly Fire, making up what Clare considers to be a second trilogy.  To this she has added a trilogy of prequels, set in the same universe but in the Victorian era.  These books, known as ” The Infernal Devices” are Clockwork Angel, Clockwork Prince, and Clockwork Princess (this last one set to be released this month, actually).  And according to her website, there will be a companion trilogy set five years in the future from Clary and Jace, grouped as “The Dark Artifices”, due to start coming out in 2015.  If you are inclined to take in all of these books, I’m sure it would be worth your time!  For my part, I’m not sure I’ve got it in me to sign on for nine other books that are more or less extraneous to these core three.

If you’d like to know more about Cassandra Clare and her other books comprising the “Shadowhunter Chronicles”, but perhaps in a more informal capacity, Clare also has a blog!